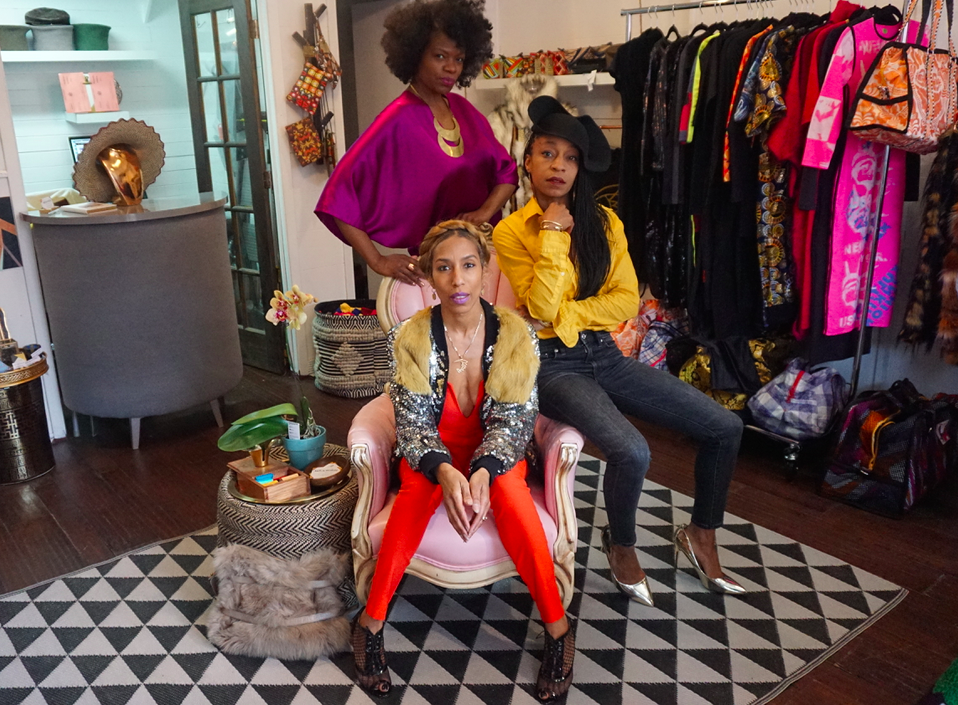 Watching creative spirits thrive in multi-hyphenate careers is not an anomaly in New York City, it’s a way of life. So what happens when four multi-passionate women join forces to build the ultimate collective? Radical Women is born. 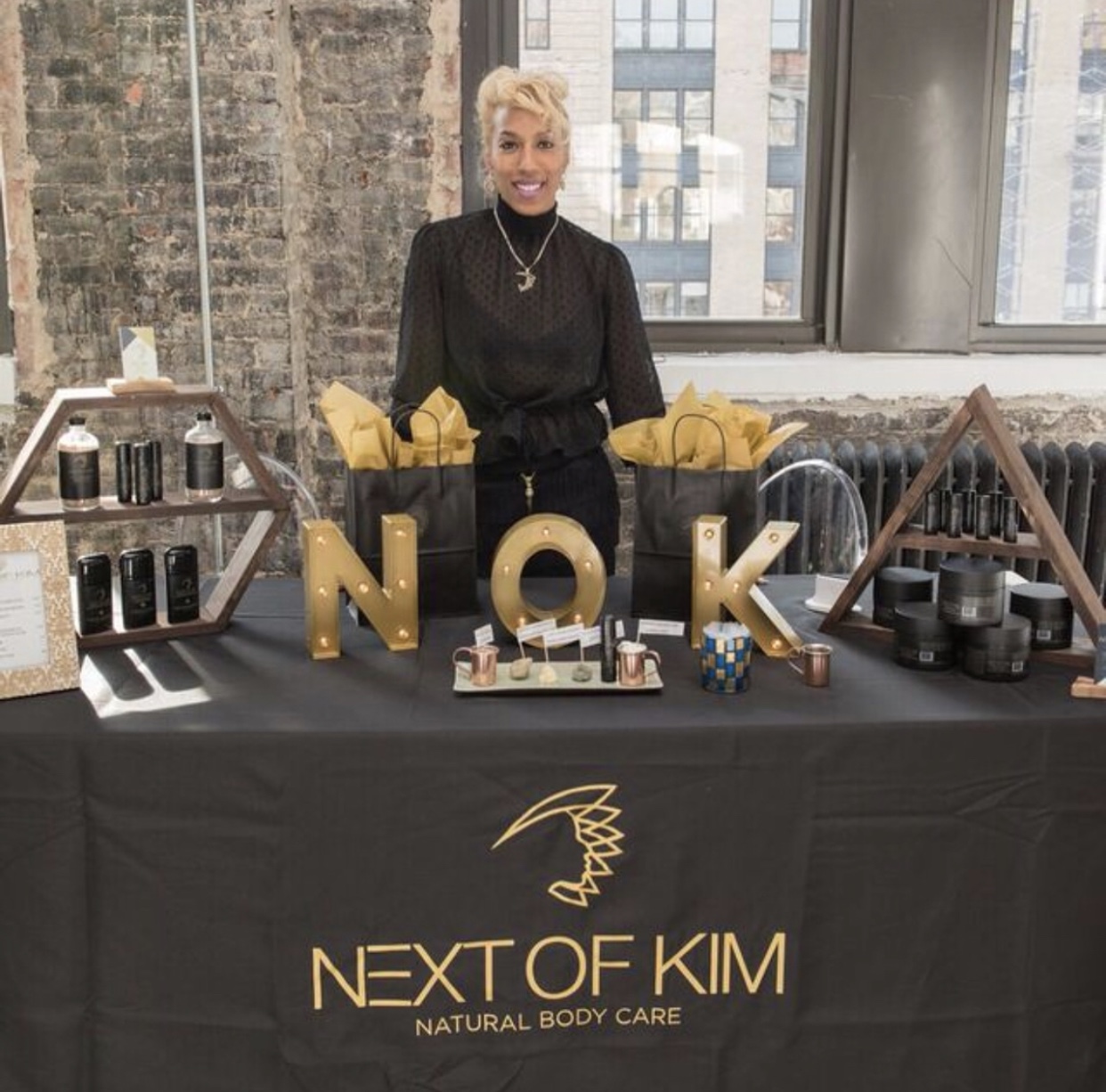 Next of Kim at In Her Shoes Holiday Bazaar 2017

On how Radical Women came to be:

Kim: The seed for Radical Women was planted while I was a vendor at last year’s In Her Shoes Holiday Bazaar. This was the very first vending opportunity for my new, beauty brand, Next of Kim, and I was placed a couple tables down from Ashaka Givens. I’ve always had tons of respect for her as an artist and entrepreneur, so I gifted her some product. The day after the event, she called to tell me how great the products were and encouraged me to keep going.

Two days later, Shana Jackson, who is a long time Brooklyn entrepreneur, told Ashaka about a beautiful, commercial space opening up on Tompkins Avenue. Before Ashaka even visited the space, she had me in mind as a partner. 2018 is my “year of yes” so I was immediately on board. We knew we wanted this to be a collective so I reached out to Djassi to see if she would be interested in joining the movement (she was!), and then of course, Holly rounded out the group. We went to undergrad together, she’s a mother, a wife, and has years of experience in fashion merchandising and manufacturing. It couldn’t get any better than this. 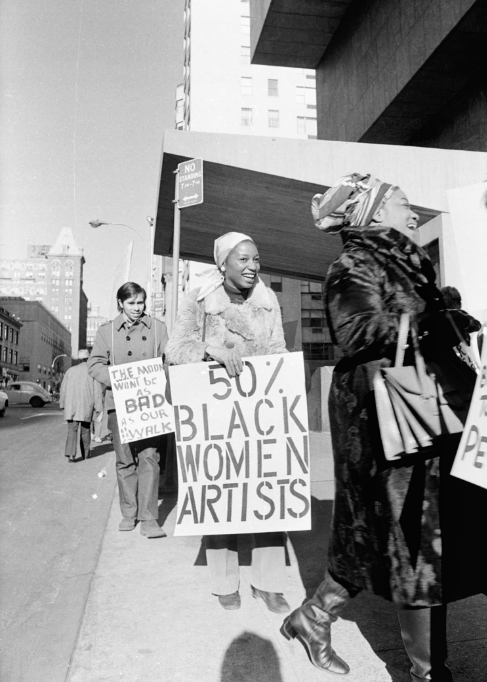 On finding the perfect name:

Kim: The story behind our boutique’s name is quite serendipitous. Radical Women was the name of an exhibition at the Brooklyn Museum in 2017. Djassi called to let me know that she just experienced this amazing exhibit that I had to check out. I didn’t have anyone to watch my son, Cassius, so Djassi’s mom offered to watch him while I went to the exhibit. It was magical. It was all about Black women in the 1960’s coming together as collectives to support, nurture, and empower each other. This way of approaching life in America and getting around the systems in place that were designed to suppress our community stayed in my spirit.

Focusing on the work of black women artists, We Wanted a Revolution: Black Radical Women, 1965–85 examines the political, social, cultural, and aesthetic priorities of women of color during the emergence of second-wave feminism. It is the first exhibition to highlight the voices and experiences of women of color—distinct from the primarily white, middle-class mainstream feminist movement—in order to reorient conversations around race, feminism, political action, art production, and art history in this significant historical period. Presenting a diverse group of artists and activists who lived and worked at the intersections of avant-garde art worlds, radical political movements, and profound social change, the exhibition features a wide array of work, including conceptual, performance, film, and video art, as well as photography, painting, sculpture, and printmaking.

As we stood outside after walking through the space, Ashaka reached for my hand and asked what we were going to name our store. Without hesitation, I immediately said “Radical Women” and she screamed that’s it! We were confident about the name but inside, there was a little apprehension about how we were going to bring this concept to life. We knew in this moment, that what we were about to embark upon was so much bigger than us. 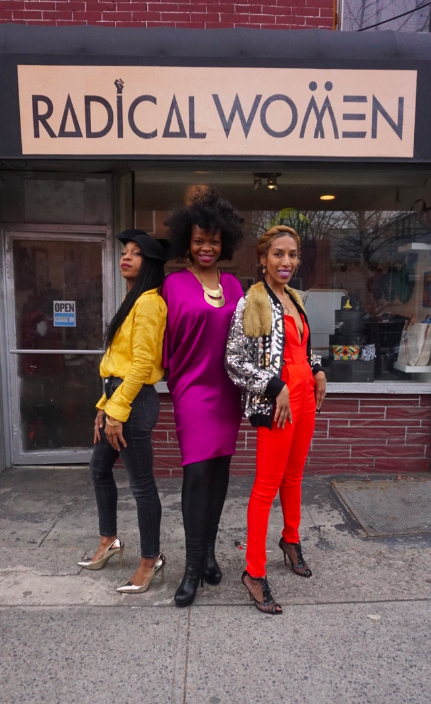 It’s more than a boutique…

Ashaka: The name of the store empowers our guests before they cross the threshold. This is a space that allows us to actualize community.  We’ve been open for less than a month and we’ve already had prayer circles in this space. It’s bigger than a boutique. It’s a movement.

Kim: Radical Women is one of the many ways we’re taking back ownership of our community and working around the divisiveness of gentrification in Brooklyn. As a licensed real estate broker, it has been very challenging to go full throttle in an industry that is forcing so many people out of our community. It warms our hearts to know that this Black business was replacing another Black business. We are here to service everyone in our community – from Section 8 to those in much higher tax brackets. All are welcomed at Radical Women. 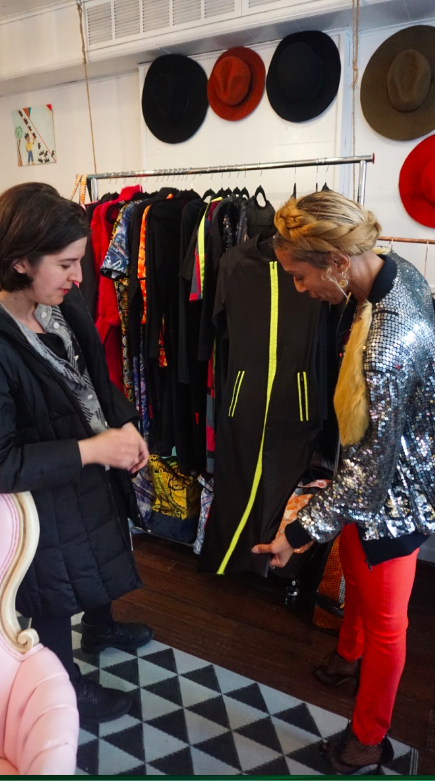 On gentrification in Brooklyn:

Djassi: Having a space where we can bridge the gap in the community and have conversations with women who may not otherwise feel comfortable engaging us, is a beautiful thing. When they come in the store they immediately feel the creativity and authenticity. It’s like we’re inviting them into our home. The issues we face as women are universal. Women come in dealing with breakups and all of the challenges life throws at them, but when they step inside Radical Women they feel embraced and can let their walls down.

On Black women making history as the fastest growing group of entrepreneurs in the country: 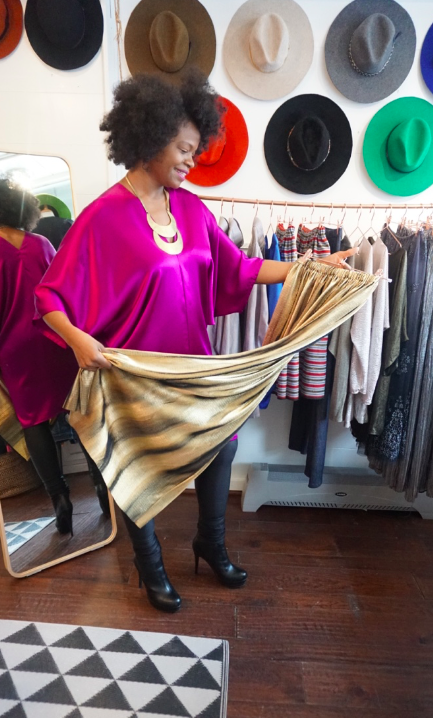 The stats surrounding Black women and entrepreneurship are astounding, beautiful, and affirming.  Black women are doing it and I’m glad to be a part of this tribe. We’ve always been bosses, about business and savvy. We’ve always been creative providers so I’m happy that we finally have the freedom to be in the forefront the way we are now. 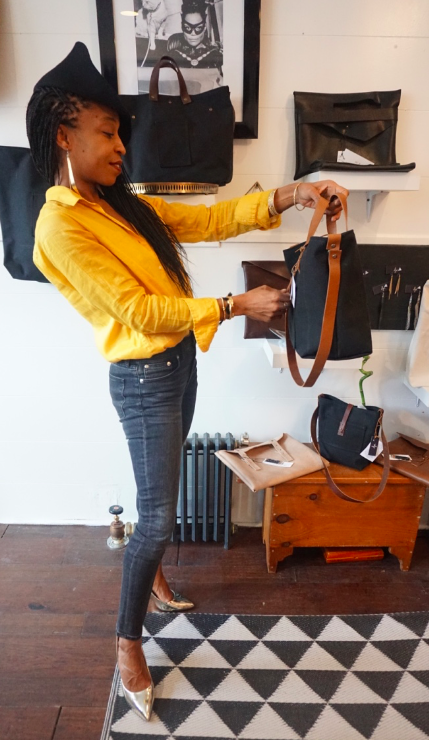 It’s so wonderful to hear that we are making  capital off of something that is natural to us. I’ve been told most of my life not to be a “Jack of all trades and a master of none.” My favorite hash tag to use on social media is #jackmaster. It’s not surprising to me that Black women are shining so brightly because we have always been multi-passionate. That’s how we’ve been. We make everything we do look easy and effortless, so I’m definitely not surprised that we’re leading the charge in entrepreneurship. 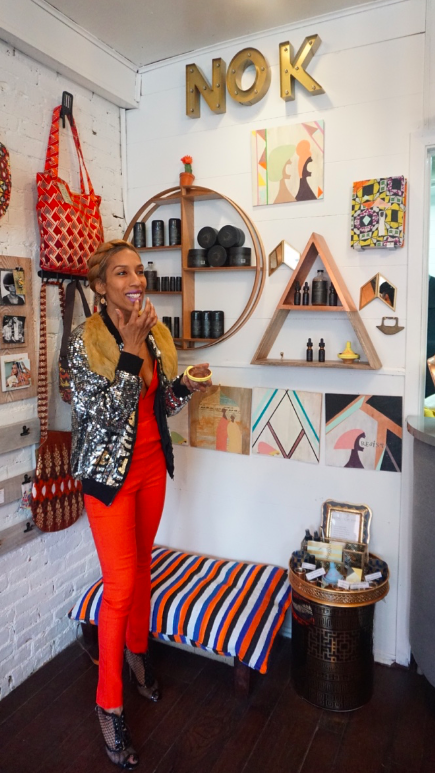 Next of Kim by Kim Hill

We are bush women. I thought the women in my family could literally walk on water. I watched my mother and my grandmother perform miracles every single day. My grandmother was the first Black woman to own a business in Syracuse, the Tippin’ Inn. Jim Brown, Ray Charles, all of the big names that came to town would come to her juke joint. I’ve watched women swallow fear and anxiety so none of this is a surprise to me. I’m glad the statistics have caught up with our greatness and magic. We are ordained by God for greatness. 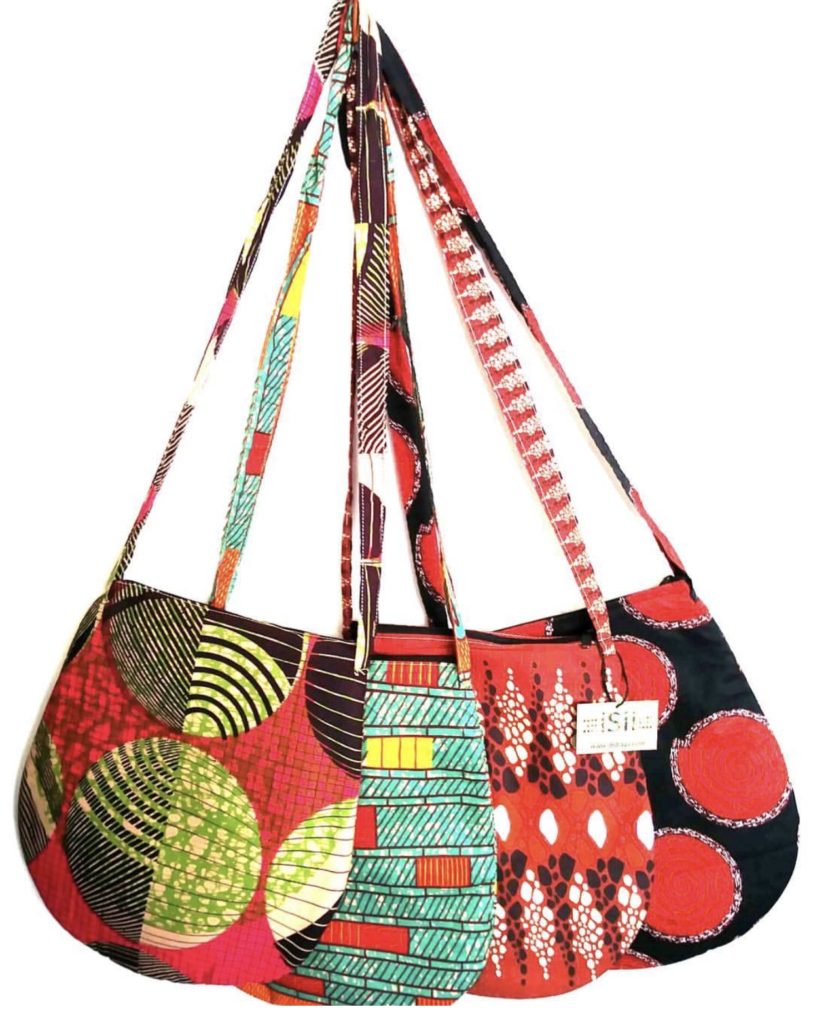 Our most memorable customer to date: 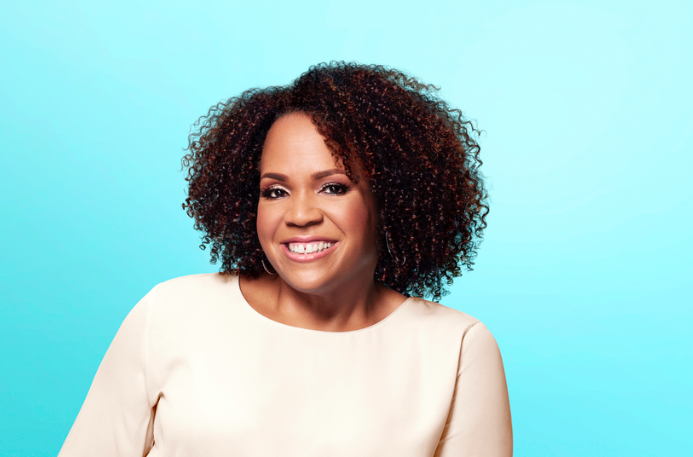 Kim: Lisa Price, the founder of Carol’s Daughter, is a huge supporter of the store. She’s so inspirational. Period. What an honor it is to have her as a fan of our work. For her to experience my skin products as a seasoned beautypreneur who paved the way for me is huge. Djassi is working on a custom bag for her as we speak and Lisa’s husband was recently gifted one of Ashaka’s hats. She supports all of our brands and it really means the world to us. 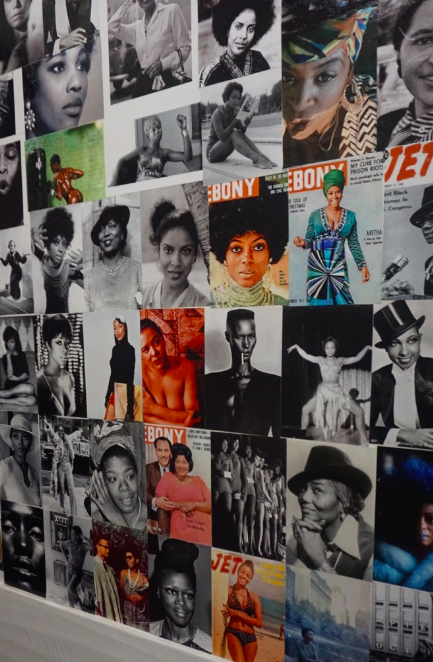 To learn more about Radical Women visit radicalwomenbk.com. If you’re in the NYC area or plan to visit soon and want to get your Radical Women fix, visit the boutique at 384 Tompkins Avenue, Brooklyn, New York 11216. Follow the movement on social: @radicalwomenbk.