Triple Consciousness: Black Feminism(s) in the Time of Now 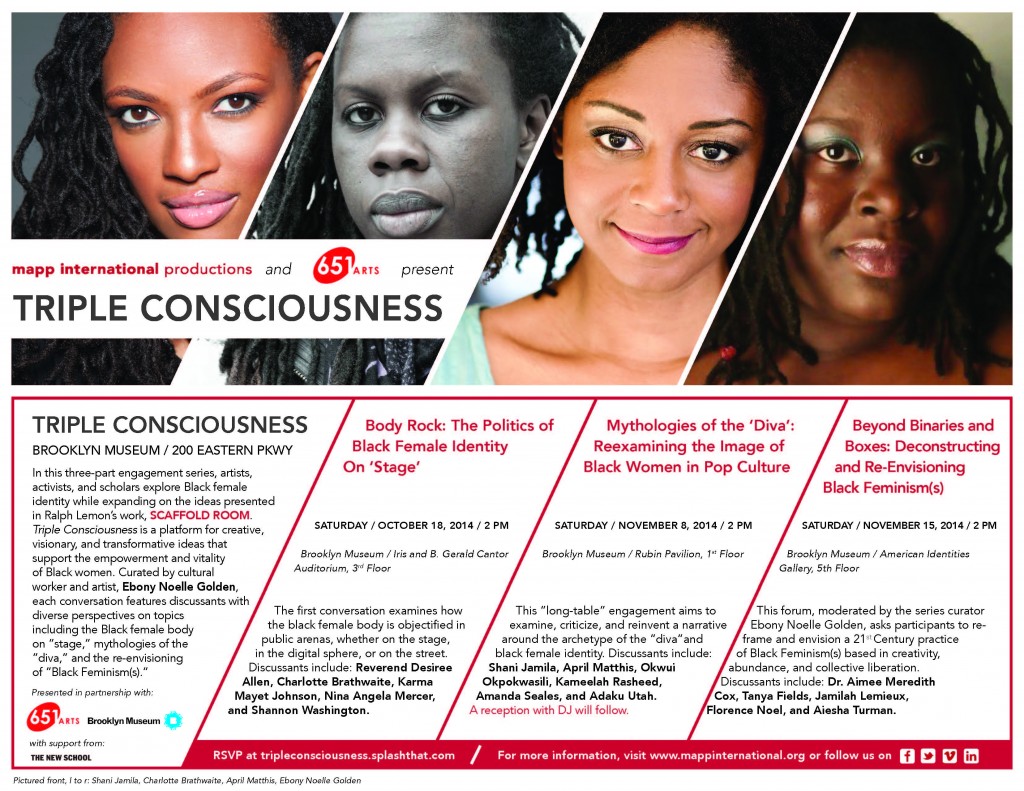 MAPP International Productions and 651 ARTS in association with the Brooklyn Museum present Triple Consciousness: Black Feminism(s) in the Time of Now, a three part program: October 18; November 8; and November 15 at 2PM at the Brooklyn Museum. The series delves into the current themes and manifestations of Black female identity in mainstream media. Participants will include scholars, educators, artists, writers, activists and cultural workers that will engage the audience in a thorough investigation into the current culture of Black women.

The goal of Triple Consciousness is to explore creative, visionary, and transformative ideas that support the holistic empowerment and vitality of Black women.  All events begin at 2PM and are free with Museum admission.

October 18, 2014 | 2PM – BODY ROCK: THE POLITICS OF BLACK FEMALE IDENTITY ON “STAGE” examines the ways in which black female body is objectified in public arenas, whether on the stage, in the digital sphere, or on the street. Moderated by playwright and Medgar Evers College professor Nina Angela Mercer. Participants include Reverend Desiree Allen, theater director Charlotte Brathwaite, Composer and Performer Karma Mayet Johnson, and Digital and Advertising Creative Director and co-founder of Parlour Magazine, Shannon Washington. (Brooklyn Museum – Iris and B. Gerald Cantor Auditorium, 3rd Floor)

November 8, 2014 | 2PM – MYTHOLOGIES OF THE “DIVA”: REEXAMINING THE IMAGE OF BLACK WOMEN IN POP-CULTURE – using the “Long Table” format, the audience is encouraged to participate in an informal dialog that considers the archetypal role of the “diva” in pop culture, and examine, criticize, and recreate a narrative around their own ideas of the “diva” as they pertain to black female identity. Moderated by human rights activist and artist Shani Jamila. Panelists include performers April Matthis and Okwui Okpokwasili; Creative Director of Mambu Badu and studio instructor at the Brooklyn Museum Kameelah Rasheed; artist, comedian and media culture critic Amanda Seales; and founder of the community healing space, SouLar Bliss Adaku Utah. The conversation will be followed by a reception, with music from DJ Val Jeanty. (Brooklyn Museum – Rubin Pavilion, 1st Floor)

Triple Consciousness is a part of a humanities collaboration between 651 ARTS and MAPP Productions, which began in the 2013-2014 season with “From Double Consciousness to Post-Black,” a long-table conversation on Black identity, an event part of the MAPP International produced Sekou Sundiata Retrospective, Blink Your Eyes: Sekou Sundiata Revisted.