Know This! with Ariana LIVE 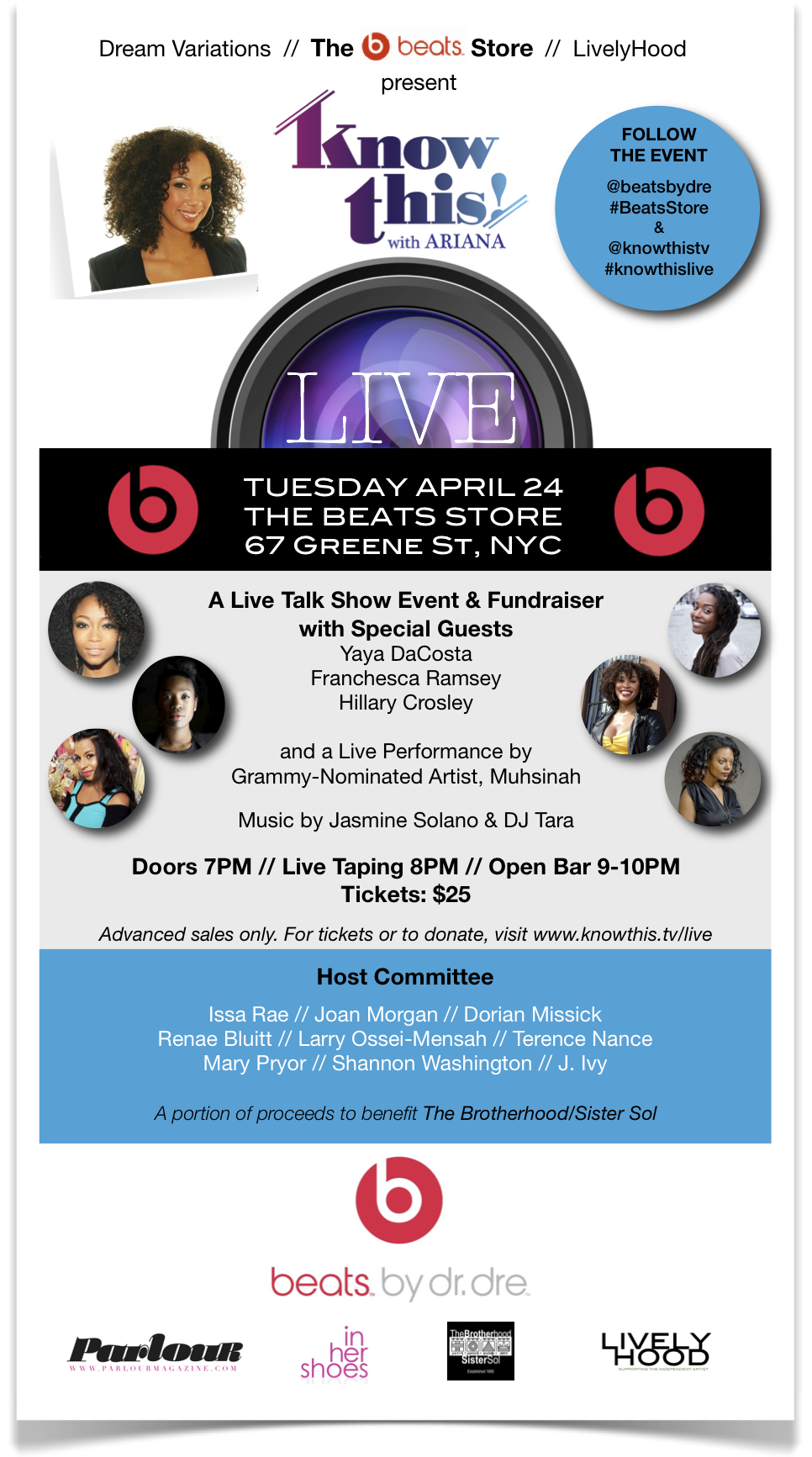 Dream Variations, in partnership with LivelyHood, will present Know This! with Ariana LIVE, taking place at The Beats Store at 67 Greene Street in Soho on April 24, featuring actors Yaya DaCosta and Dorian Missick, viral video blogger and frequent Anderson guest Franchesca Ramsey, and a live musical performance by Grammy-nominated artist, Muhsinah. The live talk show event, taking place from 7-10pm and streaming live via the internet, doubles as a fundraiser for Know This! and its production company, Dream Variations and a portion of the proceeds will go to Harlem-based youth organization, The Brotherhood-SisterSol.

Dream Variations and LivelyHood are proud to debut the one-hour pilot of Know This! with Ariana LIVE at The Beats Store. In response to today’s negative reality TV representations, Know This! LIVE will entertain and empower audiences with its youthful approach to music, pop culture, politics and positivity through a hot topics panel segment featuring actress/comedian Franchesca Ramsey and music journalist Hillary Crosley, a featured interview with actress Yaya DaCosta, and a musical performance by Grammy-nominated artist, Muhsinah.

The event’s host committee includes influential media makers including Awkward Black Girl creator and star Issa Rae, award-winning journalist and author Joan Morgan, Sundance-selected filmmaker Terence Nance and Grammy award-winning artist, J. Ivy. Know This! LIVE is also excited to partner with media sponsors Parlour Magazine, an online destination for women seeking the best in global culture, news, style and music. And blog, In Her Shoes, the one stop shop for women committed to being the captain of their own ship – where Fly Female Entrepreneurs shine.

The event includes a press and networking hour from 7-8pm, a live pilot taping from 8-9pm and an open bar celebration from 9-10pm sponsored By Neely’s. A limited number of tickets are available to the public for $25 at the event’s webpage, www.knowthis.tv/live. The event will also be streamed live online via UStream and available for viewing starting at 8pm ET on the event’s webpage. Those unable to attend are invited to donate on the website.