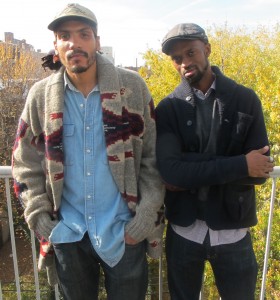 Let’s face it. Funding a film independently is no small feat. Just ask Brooklyn-based filmmakers and creative visionaries, Daoud Abeid and Dahkil Hausif of Sunshowah Films. After realizing that compromising quality for limited budgets is simply not an option, this dynamic duo hopped on Kickstarter to raise funds for their latest masterpiece, “…The Harder They Fall.” As a coming of age story from the streets of Brooklyn to the mountains of Jamaica, “…The Harder They Fall” shows just how far a parent will go to save their child from himself.

In Her Shoes had the pleasure of talking shop with these two dynamic talents as they prepare for what just may be their greatest piece yet. They’re known for making statements, but live each and every day of their lives truly making a difference.

In Her Shoes: Describe Sunshowah Films in 140 characters or less

Sunshowah Films: Sunshowah derives from the word “sunshower” which is a natural occurrence that makes people stop and take notice.  We added the “show” because we entertain and shower the audience with light (insight). 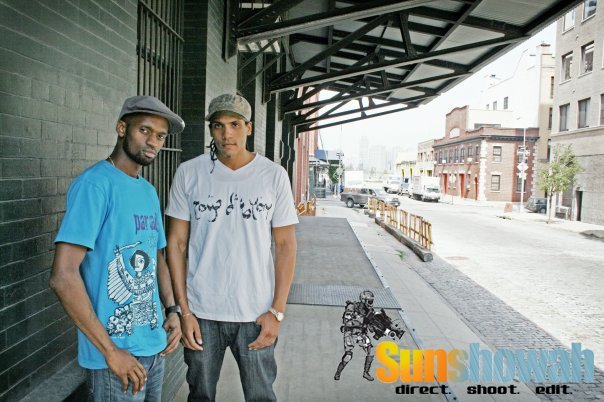 In Her Shoes: I know that the two of you have been friends since your days at Syracuse University.  At what point did your friendship evolve into a business partnership?

Dahkil: The very first time I shot an interview Daoud took notice of what I was doing and gave me a few tips (which means he told me to turn the TV off in the student center when people were watching it, then kicked everyone out of the room so that my audio wouldn’t be ruined).  We became close like brothers in college and always talked about working together, but the opportunity didn’t provide itself until after school.

I had shot an interview of Black Rob during the Bad Boy days and when it was time to edit I asked Daoud to come in the bay with me and provide some insight on the direction of the piece.  Our instincts were congruent and everything clicked, so from there it was just natural that we join forces to bring our stories to the surface. 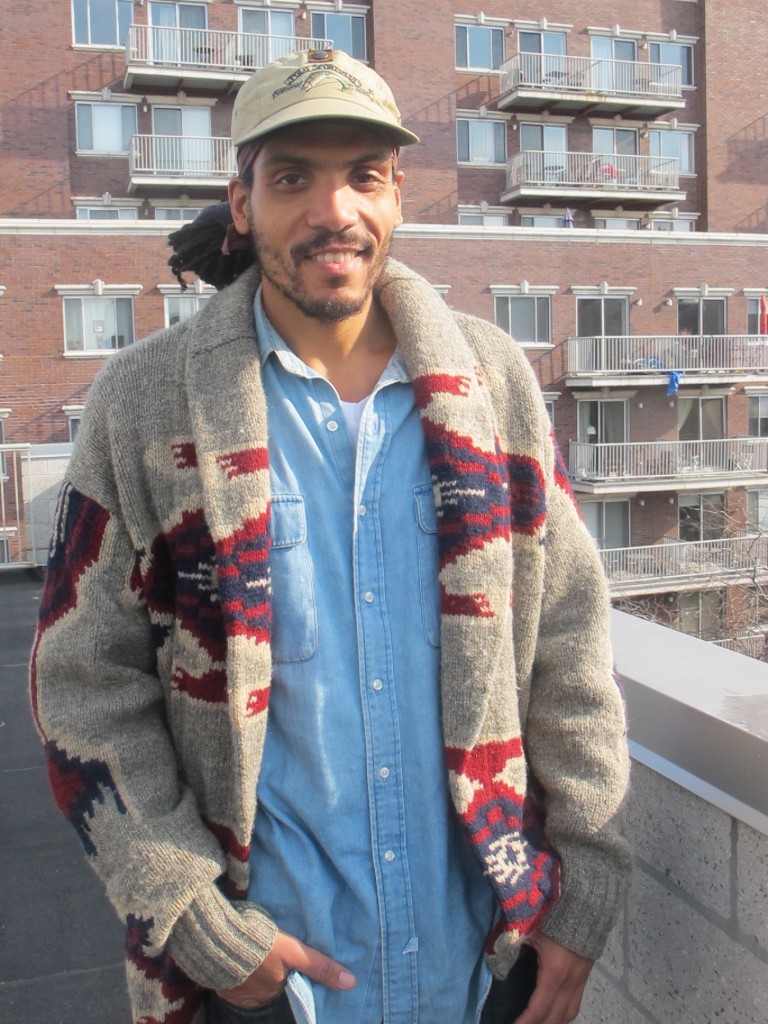 In Her Shoes: What tips do you have for readers interested in going into business with a friend?

Daoud: You must understand and respects your business partner’s strengths and weaknesses. Expectations can destroy a friendship turned business partnership so you have to be honest with your friend about how you work, what you expect, and what you can bring to the table. To maintain the friendship it’s imperative that you develop and respect this understanding.

Dahkil: We thrive because we share to ideals in common:  honor and dedication to the idea.  We are both honorable men.  This can’t be understated – before we got into business with one another, we trusted each other.  We are brothers.  So when we are working we are dedicated to making the idea as great as possible.  What that means is that we rarely say “no” to the other’s idea.  If one of us doesn’t initially see the other’s idea working, that same person puts energy into figuring out how to make it work.  Then we have two or more paths and we figure out which one works the best.  This is all worked out before we get on the set, and more often or not, by the end, neither of us can remember with whom the idea originated – we’re just energized by how dope it is. 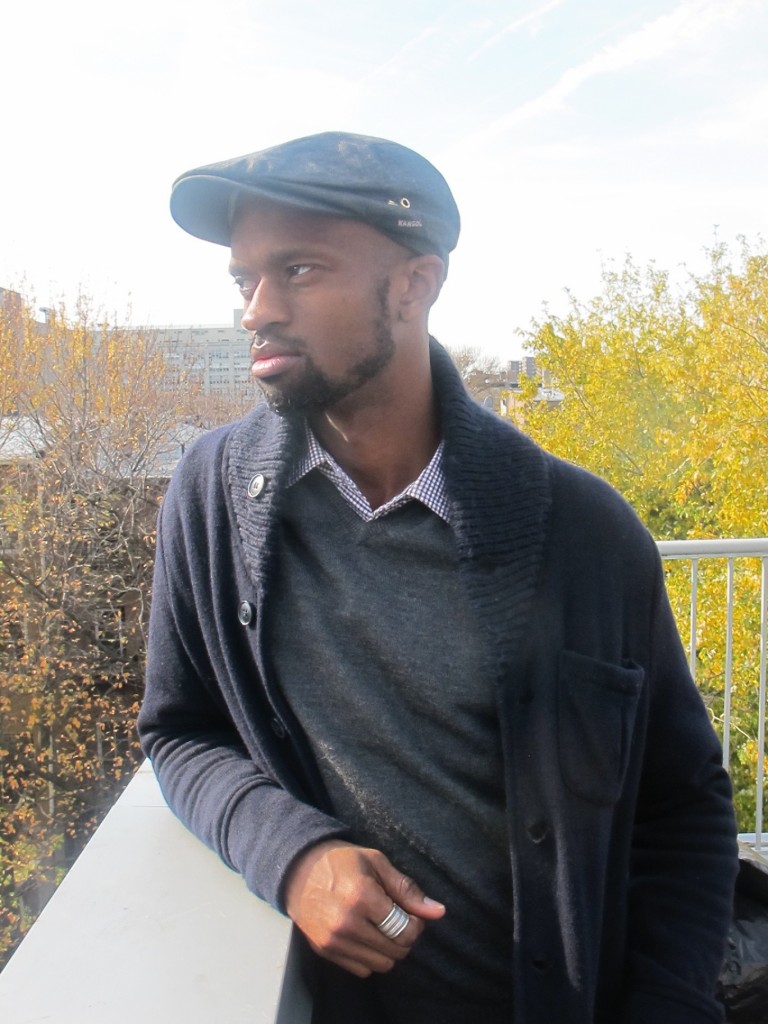 In Her Shoes: There’s so much intellect and thought behind your work. Explain your approach to storytelling and how you separate Sunshowah from other film companies in the industry:

Dahkil: I once took an African Orature class and my professor taught us that in Africa, there is no ownership over stories.  Everyone has been telling the same stories for thousands of years, so what distinguishes the storyteller is how they tell the story.  We try to focus on telling a story better than anyone else, so we have dedicated ourselves to being not just “entertainers”, but craftsmen.

Daoud: We have studied ourselves since we were teens. We observe living so this discipline is applied to our storytelling and we have a strong sense of people, psychology, history, and mythology which helps to shape the characters in our stories. Instead of  trying to make stories or characters, we allow them to grow organically based on our knowledge and life experiences. 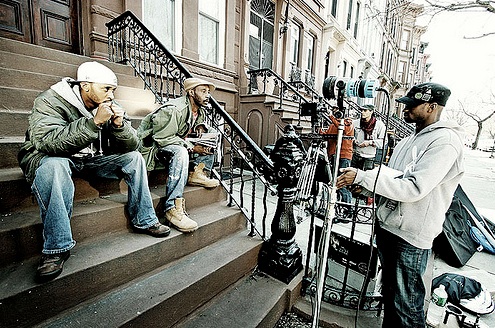 On the set of “Shades of Brooklyn”

In Her Shoes: So how did you go from your 2008 film, “Shades of Brooklyn,” to your most recent project, “…The Harder They Fall”?  What was the inspiration behind the film?

Sunshowah Films: “…The Harder They Fall” was inspired by our participation in an art day camp in the Blue Mountains of Jamaica. We ran a video production workshop and the young people were naturals; we almost had no choice but to think of a way to harness and help them cultivate their natural abilities.  The environment and personalities on that mountain are so dynamic and rich that we knew we had to create a story inspired by our experience there. 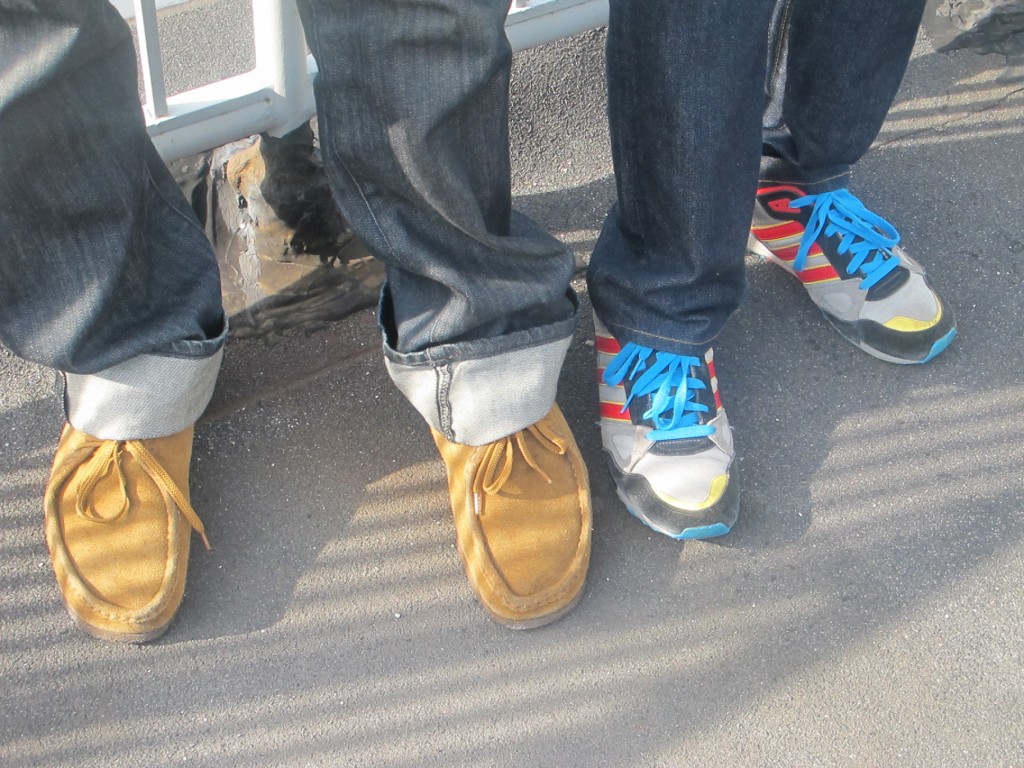 Dahkil: I’m a pretty busy man.  The mornings usually starts with an insightful conversation with my lady, then pick my son up and take him to school.  I’m the Chair of the Diversity Committee on the Board of Trustees at his school, so there is usually some school related business in the morning.  Off to work where I get to edit commercials (spotwelders.com) and make art. My evenings are usually spent either collaborating with Daoud on various projects (either writing or story development), Kuntaw training (Filipino martial art), or watching movies (have to stay studying).

Daoud: I wake up, drink lots of water, stretch, write some thoughts in my journal, share ideas and communicate with like minds via social media, eat some fruits & speak with my other business partner regarding our company coup d’etat Brooklyn. I make some lunch, spend two hours teaching a filmmaking workshop at a local high school, share ideas throughout the day with Dahkil via iMessage & email, assist with the kid’s class at our martial arts school, then take the adult’s class, cook some food, attend the events I host at NYC host spots, get some sleep then do it all again. 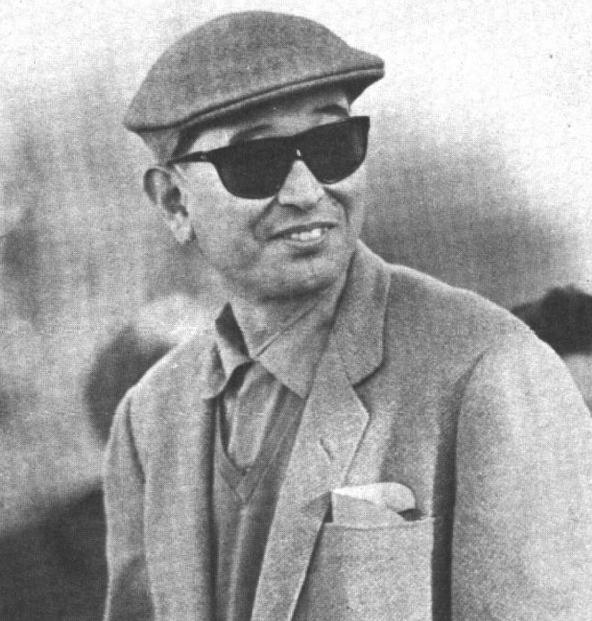 In Her Shoes: Which film icons (past or present) would you say inspire your work?

In Her Shoes: What can we expect from Sunshowah Films in 2012?

Sunshowah Films: After “…The Harder They Fall” we have a feature length version of “Shades of Brooklyn” ready to go, a film we’re working on with Malik Yoba, “What’s On The Hearts of Men”, and we are currently in the story development phase of a television series that will be shot in Bedstuy.

There are just six days left to help Daoud and Dahkil reach their Kickstarter campaign goal of $20,000. Are you in? The dynamic duo has already raised over $14,000 so let’s join forces to help collect the remaining funds needed to bring this amazing project to life! To learn more about Sunshowah Films visit www.sunshowah.com or follow the movement on Twitter by clicking here. Ready to invest in “…The Harder they Fall” via Kickstarter? Click here now!