By In Her Shoes Contributor: Jade Earle

Isn’t it a good time to be a creative? We’re making our own content, calling our own shots and telling our own stories. Today’s Fly Female Entrepreneurs are the beauties behind BlackandSexy.TV, the increasingly popular digital platform with some of my favorite online shows like The Couple and Roomieloverfriends. Read on as Jeanine and Numa talk about how they got started,  meeting the demands of their growing fan base, and thoughts on the next wave of digital content:

In Her Shoes: What moment made you decide to create your own online content instead of waiting for a major network to follow up with you?

Numa: We always say our entire lives brought us to this path. An entrepreneurial spirit mixed with non-stop creativity and a desire to lead. I do remember one “aha” moment when I was on the phone with Dennis (Founder) while pumping gas. The movie – A Good Day to be Black & Sexy – had just premiered at Sundance. I was working with him on the overall shaping of the Black&Sexy brand to keep it alive and expand – coming up with ad campaigns and ideas for more films and other content. Our first milestone collaboration was when I photographed the movie poster. As the DVD release was coming near, the entire team, including Jeanine and Brian, started filming a series of skits, and mini vignettes about the characters from the film and it just hit me like an epiphany while pumping gas. I got really excited telling Dennis “you know this can be just as big as an HBO online” and I suggested we move into serialized content as soon as possible. Around that time Jeanine had the idea for The Couple and really all of our desires just came together in a harmonious way. We all kept working and the dream started taking on more of a shape. We are still shaping it together but that gas station moment I saw a flash of how big this thing could go. I think we all have moments like that – mini visions that give clarity. 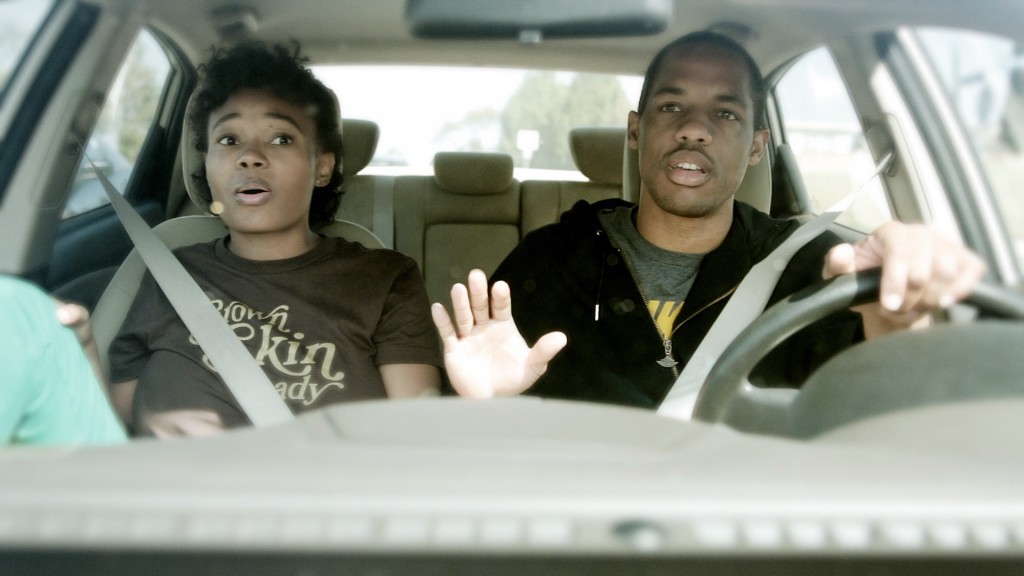 In Her Shoes: How do you go about creating ideas for original content? Does it come into fruition from a previous conversation with friends, through social media, through the viewers?

Jeanine: All of our content has spawned from true life experiences. Sometimes it’s us sitting around talking about something and as we talk we realize “hey, this really has some energy behind it, let’s see where this can go.” And sometimes we are just inspired by the events around us and how they affect(ed) our lives. We pride ourselves in taking the normal everyday situations and bringing them to an audience with a purpose. A good story is never too hard when it’s real because as we know, art imitates life.

But it doesn’t end there, we also make sure we listen to our audience as they are very vocal about things they do or don’t want. Paying attention to the needs of the audience can help guide decisions about what shows might work best based on a situation that was a hot topic, a character that the people would like to see again, and where these shows might fall in the line up. Creating shows is a careful balance of listening to our guts and listening to our audience.

In Her Shoes: How would an online creator go about creating a crowd sourcing campaign (especially if they don’t have a major social media influence already)?

Jeanine: They would hire Numa Perrier. 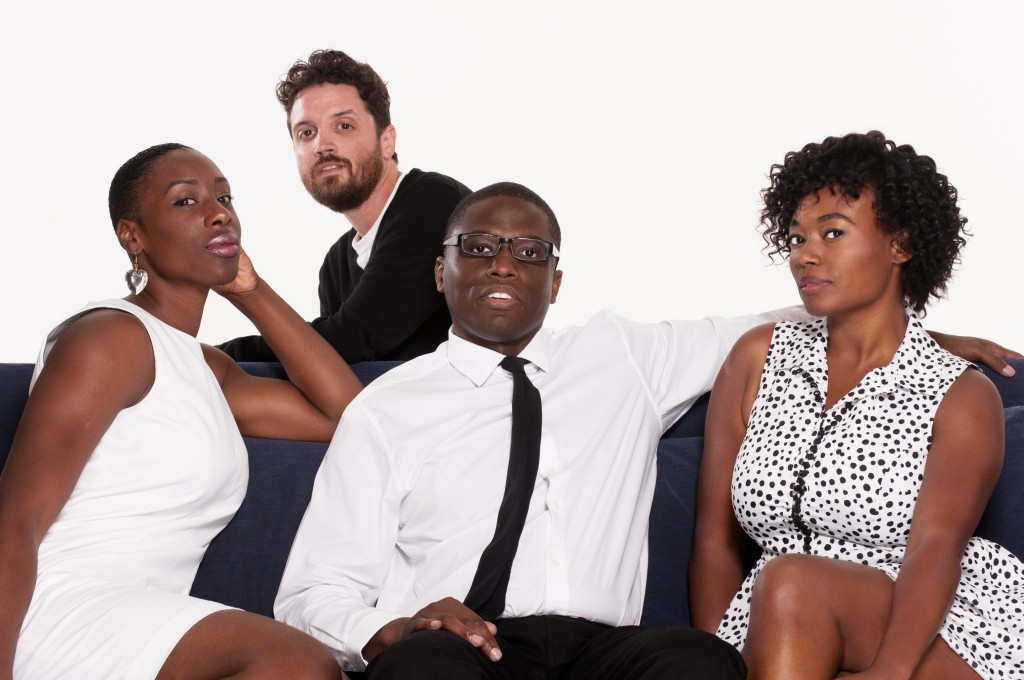 In Her Shoes: Are there any other crowd sourcing methods you’ve discovered recently that weren’t around when you first created Black&Sexy?

Numa: When we first started there was no Kickstarter or Indiegogo. I mean, they existed but it was the early days and we hadn’t navigated it yet. We made phone calls to fund Roomieloverfriends for example. Dennis and I sat down and made a list and called people asking for $30 each. Most gave that and more. Jeanine also came through with money to get that series made. We just found a way. Our own sort of crowd funding just made more sense for us until those platforms and our audience grew. 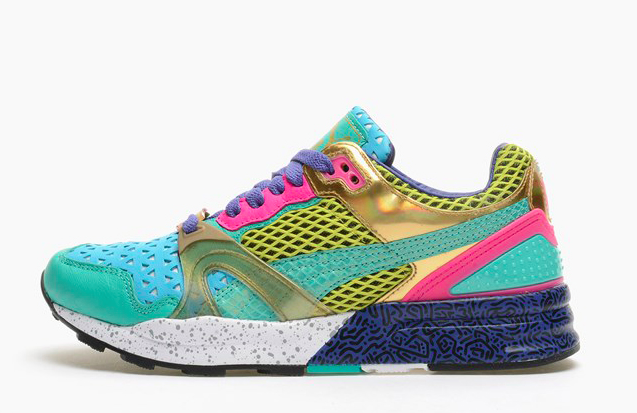 Jeanine: A day in my shoes is pretty random because everyday there’s a different hurdle to cross, thing to do, place to be. I edit, write, brainstorm, send and receive A LOT of emails, sitting with writers, and at the end of the day, I’m always always thinking of a master plan.  Currently Im working on three projects for the network, and that has my days pretty sewed up.

I spend most days at my desk listening to early 2000 R&B and current trap music while I write, rewrite, write, rewrite, hydrate repeat. I’ll get a phone call from my mom, whom I talk to everyday, I’ll text my dad about story lines (he’s apart of my writing team), and email or call my other two writing partners about stuff. At some point I’ll stop writing on one project and hop on another, and email and make calls for that. If I remember to, I’ll eat. I’ll try to be active and go for a bike ride or go to the gym to get some good ole’ exercise and sunshine, but then I’m right back at my desk. Every now and then I’ll go to an event, but using brain power is exhausting, so I usually never make it to events I’d like to go to because I’m sleepy (and I don’t want to pay for parking). Instead, I use my last inch of energy to watch an episode of Dr. Who or Parks & Rec.

In Her Shoes: How do you all continue to meet the demands of your growing fan base without burning out or putting too much on your plate?

Numa: HAHAHAHAH! It’s the nature of the beast. I do make sure that I give myself days off which are really more like half days off to go see a movie or do nothing. It’s a constant game of reigniting the interest for a series or a project when all of it is a long term thing. We can’t stop the train so we have to figure it out everyday. Finding ways to relieve stress. Working out is actually a really good way to do that so that’s a real part of my schedule now.

In Her Shoes: What are three tips you’d give to an aspiring online content creator?

1. Be consistent with your content (when it comes out, the length, the story)
2. Build a solid team that you can depend on
3. Do something different, daring, as NOT seen on TV

In Her Shoes: What do you think the “next wave” of online content programming will look like?

Numa: The “pilot presentation” is very popular now. It’s a newish wave happening. I’m not a huge fan of it over all because it sets you up to hope someone likes it enough to give it more life. Now this can definitely be a successful path because some shows have moved up the ranks this way. But then you are waiting in line again for the next green light and the next green light. So that’s definitely a wave for better or worse. We are more interested in growing an audience steadily with content that we green light for ourselves.

← Previous Story In Her Shoes + ESSENCE Present “The Beauties & Brains Behind the Brands III”
Next Story → Juggling Career & Motherhood: Tips From 10 Mompreneurs