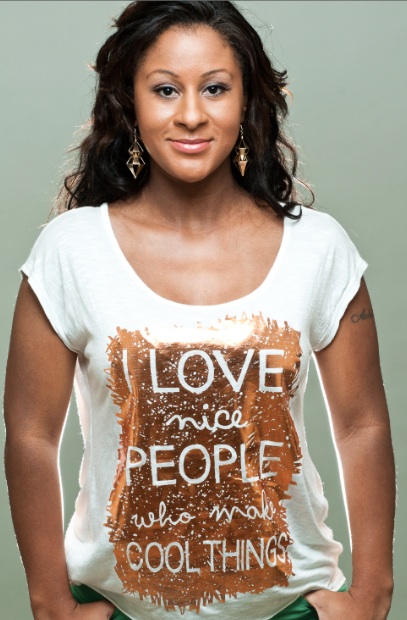 It may come to no surprise to you that women are underrepresented in the STEM (science, technology, engineering and math) worlds. According to a recent study by the Institute of Women’s Policy Research, women of color – particularly Black women – are almost non-existent in tech-based careers. Enter Angela Benton, the visionary behind NewME, a mission-driven company, accelerating underrepresented entrepreneurs around the world. NewME speeds up your road to success by “digging in” and giving you the support you need to win. The company’s platform is a customizable way to plug into expertise, people, and resources right away when you need it most. Since its launch just three years ago, the company has raised $12.9MM in funding for its entrepreneurs. Quite impressive, right? Read on to learn more about Angela Benton, the beauty behind this brand, what inspires her to excel in an industry that traditionally hasn’t welcomed women, and how her movement is changing the game as we know it:

In Her Shoes: Congrats on all of the accolades you’ve been receiving for the work you do in technology! You’ve been recognized by Goldman Sachs, Fast Company and Marie Claire just to name a few. Why do you think that women excelling in the tech industry is such an anomaly in 2014?

Angela: The technology industry is very much a “boy’s club” and consists largely of men. That said the culture of the industry has to change to be more accepting and welcoming of women not just as participants in the development of products but also as leaders and CEO’s.  Needless to say the real impact and change may take a while simply because we’re filling the pipeline of women who might not normally consider tech their thing but also changing the mindset of those that are currently dominating the industry. 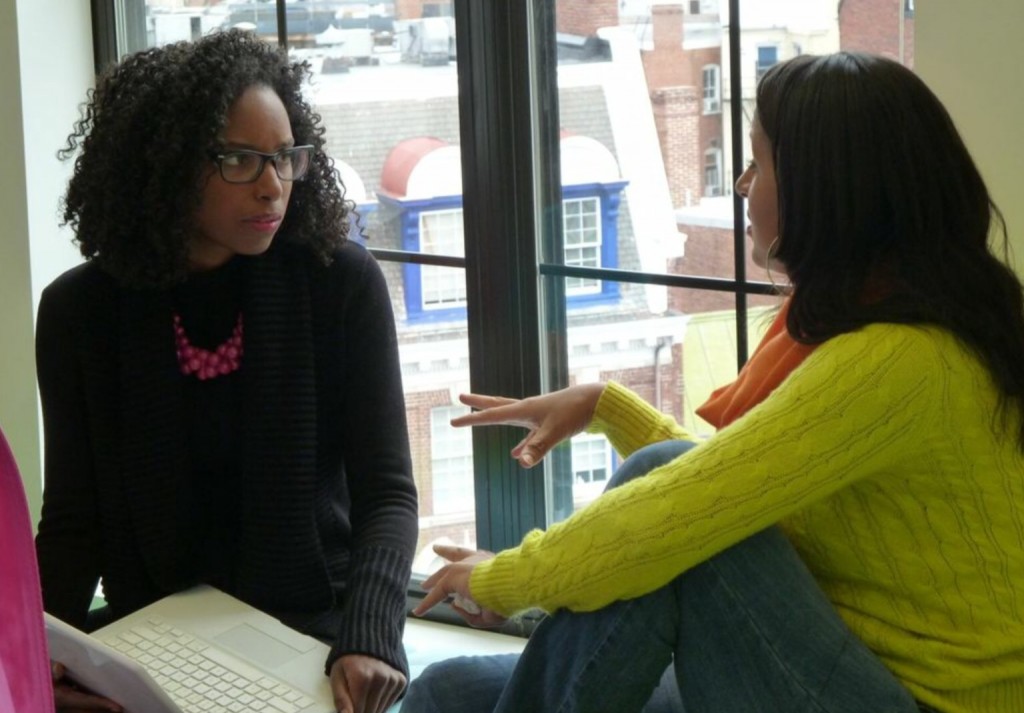 In Her Shoes: What was the catalyst for your interest in pursuing technology as a career?

Angela: Design was the catalyst for my career in technology.  I started out as a designer, first in print then I moved to web, and I wanted to have more control over the end result of what I was designing so I ended up teaching myself how to code.

In Her Shoes: What’s the meaning behind the name of your business, NewMe?

Angela:  NewME actually stands for New Media Entrepreneurship but has since taken on a whole new meaning. The brand NewME helps anyone build a brand new you. We do this through entrepreneurship training and helping people manifest their dreams which in turn ends up changing their lives. We are believers in people from all walks of life being able to create a new version of themselves. Our entrepreneurs have raised $12.9MM for their companies after working with us and it’s just more proof that it really doesn’t matter where you came from.

In Her Shoes: Tell us a little bit about your mission to bring diversity to Silicon Valley. What has been your strategy and how well is it being received?

Angela: Our strategy is to basically to create our own pipeline of entrepreneurial talent, train/school them on the rules of the game so they can be successful, and connect them with resources in our network (investors, etc).  Generally we’ve been well received most importantly because what we are doing is actually working however everyone has critics.  Some of ours feel like we should only focus on entrepreneurs who are technical and can actually code, I don’t agree and think that would slow down the impact dramatically since the number of African-Americans graduating with technical degrees is low. I think it’s an excuse to keep the industry the same for as long as possible and exclude minorities from actively participating today, not in our tomorrows.  I also think any good entrepreneur should know how to pool resources to get something done, that includes doing what they need to do to get a great product on the market. You can’t teach that kind of hustle. We’re more concerned with working with entrepreneurs like that. 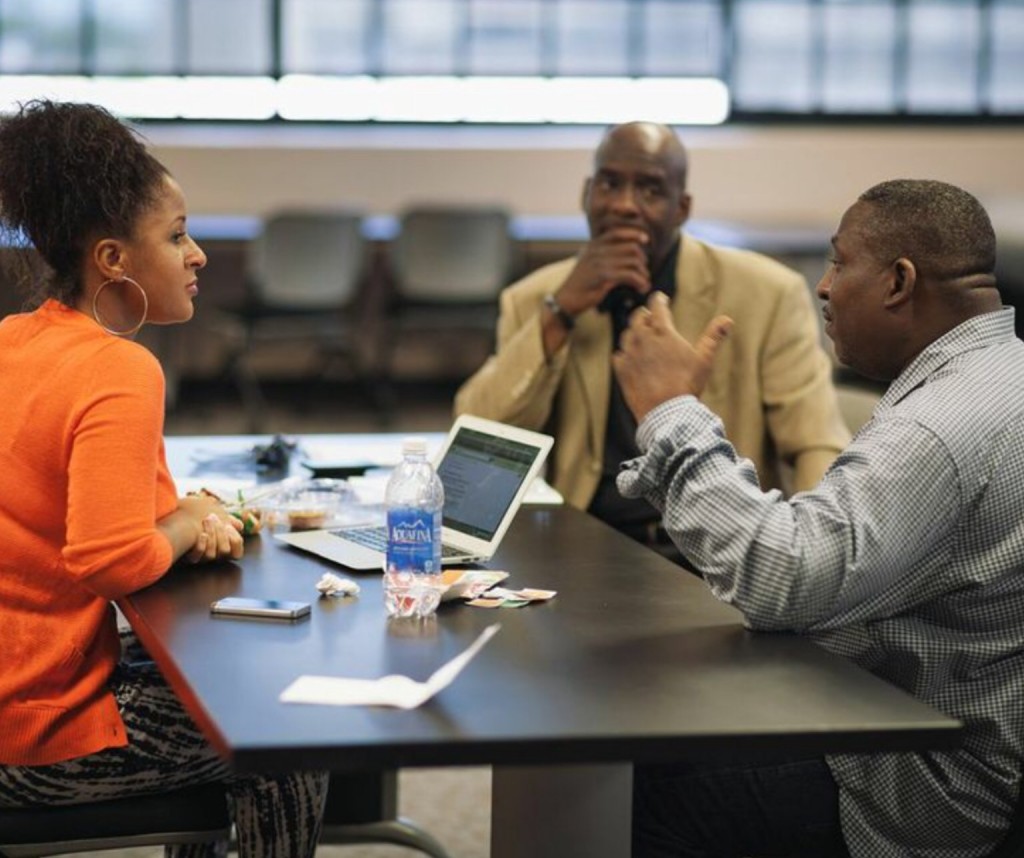 In Her Shoes: You’re known for mentoring what some may consider to be “high risk” start ups, including the former inmate who launched pigeon.ly to help inmates connect to the outside world. What inspired you to mentor this underserved segment of the industry?

Angela: It’s pretty simple: it was an interesting business that I knew investors have likely never gotten pitched before. Additionally the founder was one of the sharpest I’ve met and had a product and paying customers by the time he came into NewME.  I worked directly with him to position his company in the best light and connected him to investors in our network. To-date they are growing fast and have raised $2MM in funding. 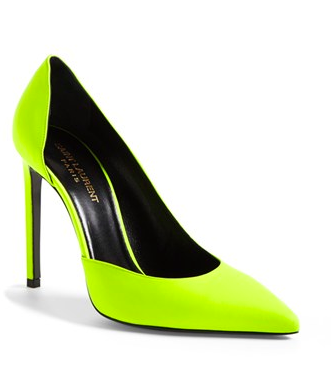 In Her Shoes: What is a day like in Angela Benton’s shoes?

Angela: My day starts and ends with my kids. In between, I’m either in my office or out in meetings.  I travel about 1-2 times a month so no two days are ever the same.

In Her Shoes: What has been your recipe to success when it comes to balancing motherhood, your personal life and entrepreneurial endeavors?

Angela: Well, it’s definitely a balance. I think I’m pretty comfortable with all things not being in balance at any given point in time. While I’m always a mother first sometimes I have to travel for work or I can’t do the things that I want to because of work. I’ve come to terms with that and instead make sure to balance the whole rather than the specific areas of my life. Also, it was helpful to learn to manage my own expectations in life…. we all try to be super woman but unfortunately it’s just not possible (yet). 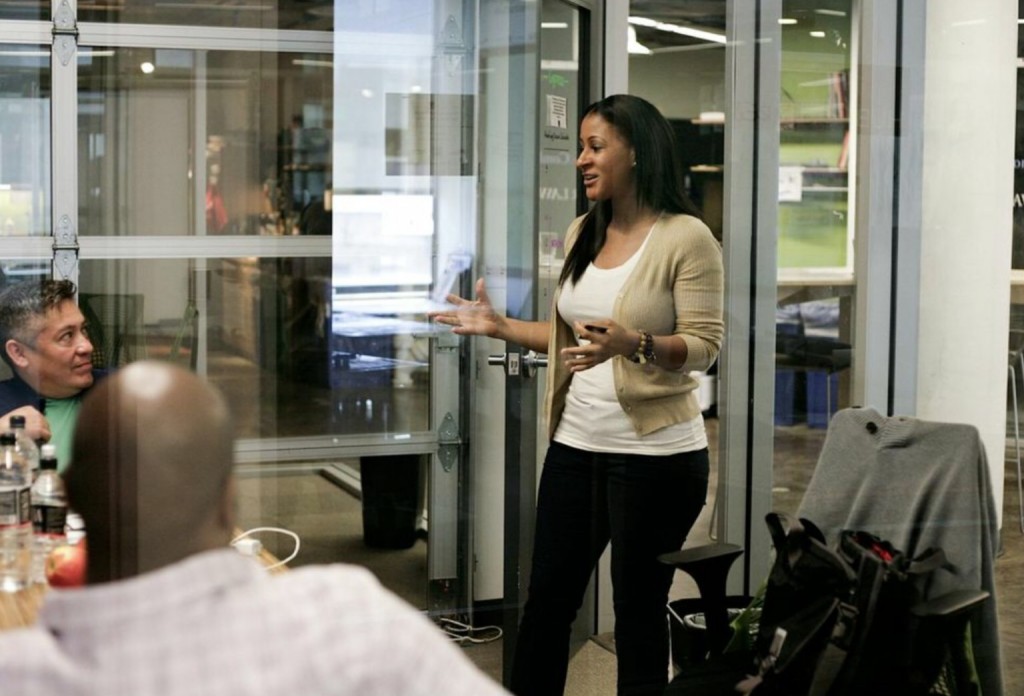 In Her Shoes: Any exciting plans in the works for NewMe you’d like to share with us?

Angela: YES! We’re really excited about our virtual accelerator NewME VR.  For a while we could only work with a select 16 entrepreneurs per year.  NewME VR takes our whole model and framework from Silicon Valley and makes it accessible to people around the world.  It’s extremely exciting for me because part of my goal and mission is to impact as many people as possible with our work, this allows us to do that.  So far we have entrepreneurs participating on 3 continents!

To learn more about Angela Benton and the NewME movement click here!

← Previous Story Want to Be More Self-Confident? Here’s How.
Next Story → May is for Mothers: CHICbusyMOM + COCOTIQUE