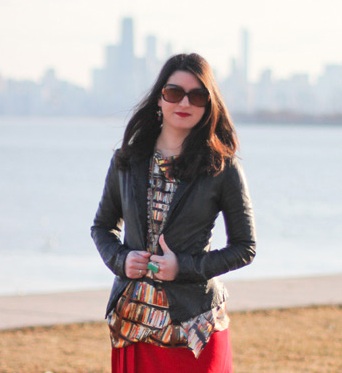 Which cities immediately come to mind when you think of style? New York, Los Angeles, Paris, and London are a few of my first thoughts but guess what? Chicago law professional-turned-photographer and blogger, Amy Creyer is on a personal quest to put the Windy City on the map when it comes to fashion and style. Nestled comfortably between the East and West coasts, Chi Town has its own vibe which definitely makes it a city to watch. Swing by chicagostreetstyle.com today to see what all the fuss is about!

Amy Creyer is the founder and photographer behind ChicagoStreetStyle.com. After graduating cum laude and Phi Beta Kappa from the Michigan State University Honors College in 2008, Creyer moved to Chicago where she accepted a position at the trust & estate law firm Duncan Associates assisting with the formation and licensing of private trust companies for ultra-high net-worth individuals and organizations . She returned to graduate school at DePaul University in January 2010 and is scheduled to graduate in June 2012 with a Master of Science in Management. Creyer plans to translate the experience she developed as a successful social media consultant into a career in digital advertising as a creative strategist.

J Brand Jeans,  Timberland, and Michael Kors have all hired Creyer to shoot ad campaigns. Oliver Peoples chose to work exclusively with Creyer to design a viral marketing campaign to create buzz around the opening of their first Chicago store. She also greatly enjoys the creative challenge of working with her non-fashion clients, which include Proctor & Gamble and Microsoft.